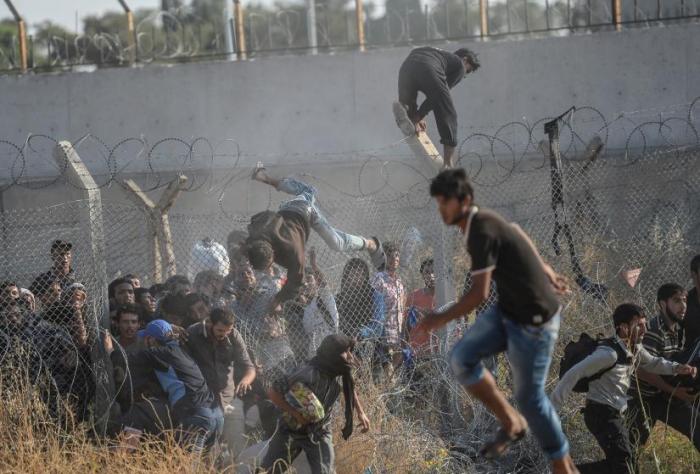 The following are four news headlines recently on a well-known site.

Police use sound bombs as clashes break out…

Violent Backlash in Germany as Asylum-Seekers Pour In…

The necessity is clear that developing countries need to become concerned with creating environments conducive for economic growth, social improvements, and improved infrastructures. The countries who are forced to deal with the crushing influx of immigrants seeking a better life is overwhelming their ability to sustain them. Developing nations on the other hand is suffering a death blow by the mass exodus because potential is pouring out of their porous borders like a container with holes. Their greatest asset is not the gold or silver in the ground but the people are their greatest asset.  When you lose people you lose possibilities.

Nations of the world are inseparably linked economically and other factors. The instability of one can lead to the instability of another. For example, if you have an economic meltdown in one country then other nations will be affected. The same is true when you have a civil war in one, the surrounding neighbors are affected by the influx of refugees seeking security, economic repercussions, and the mounting tensions due to its neighbor’s instability. We must begin to take a global perspective and not just a nationalistic approach. What happens in one nation has ramifications that can be felt in others.

The number one impediment to development in a nation is the lack of peace. Without peace there can be no development. Peace to development is as necessary as water is to fish. They depend upon the environment of water to thrive and succeed. If you dry up and take away the water the fish automatically die. We could build beautiful homes for them, smooth highways, plant gardens, and expend energy, money, and time to make fish live and yet we would fail. The persistence in doing the wrong thing and implementing the wrong methods will lead to discouragement and more failure. Nothing can replace the environment that water produces. Yet, this is what happens in our attempts at developing nations without tackling the problems of tribal factions, racism, class warfare, and the political intoxication of power hungry leaders.

Solutions elude us primarily because one’s ideology in creating the path to peace is not another’s answer to the process to peace. Instead of solutions based, it becomes conversion based and the divisions are widened and perpetuated instead of dissolved and eradicated. Then what is the answer? The Golden Rule states “treat others the way you want to be treated.” When people do this, they create a culture of honor that permits others who are different to exist without repercussions for being different. Honor is the tool that is used to build a foundation called peace from which development can now take place. Innovation cannot take place in an environment sullied by division and strife.

Peace is an environment that allows the seed of a nation to grow. The seed is the potentiality of its citizenry. National unity is a breeding ground for growth. The dissolution of tension is predicated on the inward purpose that the country’s future is not based on individual good, but what’s best for the whole nation. Another way of putting it is – it takes teamwork which means its all-inclusive. Everyone is important for the success of the nation and no one is unimportant to be left behind. However, unity doesn’t “just happen!” It takes an intentionality requiring personal effort.

The next time you are faced with a decision, just take a moment and think how you would want to be treated if you would be the one on the receiving end of your decision. One person at a time, one decision at a time, let’s create a culture of honor. What if business owners operated with this ethic? What about politicians? How about employees? What if every interaction of life was governed by the law of treating others as you want to be treated?

A different world it would be!